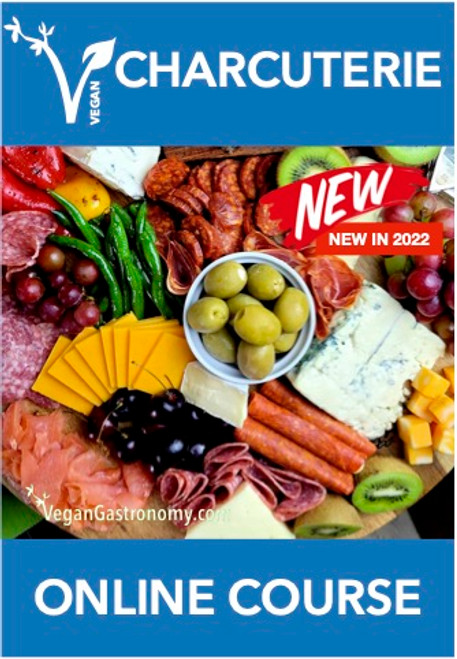 Charcuterie is part of the garde manger chef's repertoire. Originally intended as a way to preserve meat before the advent of refrigeration, they are prepared in modern times for their flavors derived from the preservation.

We have developed a VEGAN CHARCUTERIE course that merges original techniques with modern thinking.

This is a Credentialed Course which is part of the VEGAN CHEF ADVANCED TRAINING program. This is only an ONLINE COURSE and will teach ways of making Vegan Meat and Vegan Cheese products, and to show how to plate these products to impress the most discerning diners. This course uses some modern new ingredients including Vegan Gastronomy proprietary developed products like Vegan Cheese Aromas, Vegan Shea Powdered Oil, and different sea salts from around the world to help preserve food you prepare.

Examples of recipes include:

Various cooking techniques will be used including baking, steaming, dehydrating and smoking to create various flavors and textures.

Finishing techniques will be demonstrated to showcase the foods for photos as well as eating.

This is a CERTIFIED COURSE and is designed for those chefs that want to impress people, yet make entertaining fresh, exciting and easy.